Well, we weren’t sure it was a fire, the man pointed out, as there was smoke pouring out of his suite and fire fighters rushing in. There was just a lot of smoke.

It was a normal afternoon. I was stressed out, trying to prioritize too many tasks given to me at the same time, trying to figure out a way to make everyone happy. I really had to pee, but sometimes I ignore my bladder for the sake of getting work done. Healthy, I know.

I finally got up to walk to the bathroom down the hall, and smelled smoke. Not a lot, not a scary amount, but definitely smoke. I walked past a suite with the door open, smoke wafting out, and some people in the hallway. Awkward smiles, no explanations offered, I kept walking. Weird, I thought. Maybe someone blew something up in the microwave.

Until, a few minutes later, as I excited the bathroom, and I immediately smelled smoke. A lot, a scary amount, of definite smoke. I walked back and hesitantly asked, “Do we know what’s going on…?”

“Oh, there’s a fire,” a woman answered nonchalantly. Almost as if I simply asked what color her shoes were.

“Well, we don’t know if there’s a fire. There’s just a lot of smoke,” a man was quick to interject.

“There’s smoke coming out of the ceiling. I’ve been told to stand here and tell people who are close by to evacuate.” 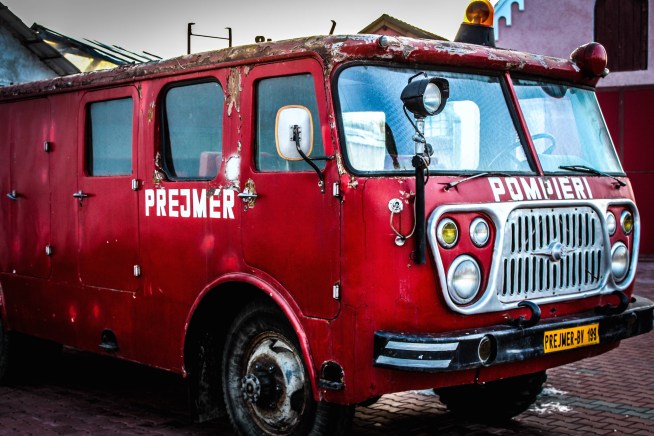 “Um. Uh. We need to evacuate the building? There’s a fire…?”  Question mark? Exclamation mark? How does one deliver that statement??

My boss came bursting out of his office – “What!?”

It was a blur of figuring out what to grab – my purse? Yes. My peaches in the fridge? Not necessary – and trying to be responsible and finish my tasks (impossible). I was sitting at my desk, attempting to email some people back, attempting to finish something before I left, attempting to get some semblance of control in the crazy situation. My boss finally said, “C’mon, it’s fine. It’s not like you planned this. Let’s go. I’m not leaving without you.”

We walked out to find eight fire trucks in the parking lot. No sirens or anything, no flashing lights – thanks for the warning. We could have worked right through it. People were standing around, taking pictures and talking. I got in my car and drove off immediately, desperate to get away.

I think America is on fire.

And then, just like that, I’m reminded the world is on fire.

I walked back from the bathroom Thursday (goodness, bad things seem to happen when Krysti has to pee), and my boss simply said, “There was another one”. The way he said it, I didn’t even question what he was talking about. I simply asked, “Where??”

We kept updating each other on information as it came. 40 dead… 50 dead… gunshots as well… 60 dead… on the beach, on their independence day, after fireworks… 70 dead…

He immediately started mentioning ideas of how to fix it. How to fix our world. Solutions, game plans, international laws, there has to be a way. I quietly wondered if we simply needed to feel it. At least right now. At least in the moment. At least I do. It’s too easy to numb out on international policy and statistics and facts of the terrorist investigation. It’s much more difficult to sit in silence and realize we now live in a world with 70 less humans. We live in a world where stories like this are all too common. We live in a world where evil seems to be winning.

The fire is blazing. I’m not sure when the firefighters will come rushing down the hallway. I’m not sure if I can evacuate this time.

They were chatting; I was staring out the window. Until a question caught my attention – “Well, how do you think we fix it?”

“Jesus,” she offered. “Jesus coming back. I don’t know what else.”

We need to start seeing people as people, I thought to myself.

Not a news story. Not a hashtag. Not as their job or race or age or gender or income level. As a person – some good, some bad, some in-between, but completely human. That person who got shot? They were a person. That person who did the shooting? They are a person. That person blowing up your newsfeed, pissing you off? They’re a person, too. As is the person in front of you in line. Your co-worker. That news anchor. The grieving family. The politician. We’re all people, as much as we’d like to think we aren’t.

I don’t know if this is the correct response. There’s a million wrong ones, after all. I don’t know if this is a solution. I don’t know if this will heal our world. But I do know it will change me. I do know I am guilty of it. I do know I’m called to it, right now. It’s far too easy to find someone to blame, to find someone to push back against, than to feel the terror of a world that’s burning. It’s far too easy to nitpick someone’s poorly worded status, to roll your eyes at an article they shared you clearly disagree with, than to realize you’re scared. It’s far too easy to numb out on explaining why someone else is wrong, than to admit you don’t have a clue as to what’s going on. You don’t have a clue what to do next. You don’t have a clue where to turn.

I’m a person – I try to make the good parts outweigh the bad, but I don’t always succeed. You’re a person – you’re right about some things, but you’re wrong about others. You deserve to be seen. Heard. Forgiven. Loved. Especially if you’re a refugee, a victim, a mourning family. But even if you post, in my opinion, ignorant comments. Even if you’re rude. Even if you’re Donald Trump, the Stanford rapist, the one holding the gun. There’s grace. There’s justice, too, and consequences and righteous anger and oh so many other things. But I’m choosing to not overlook grace, simply because I want to. Because it’s tempting. Because it’s easier. Sometimes hate is easier – sometimes deciding who gets to be treated like a human and who doesn’t seems like the right idea – but that’s what has gotten us here, isn’t it? That’s what started this fire?

Maybe we need to pour grace as water on the flames, instead of allowing our anger to add fuel to the fire.