Singing Christmas carols at church always gets to me. Singing the words, surrounded by my people, puts me smack dab in the middle of the Christmas story like nothing else can. I can’t quite explain it. This year, while singing the same songs as always, a new Christmas-time truth hit me: It feels like we’re living under the rule of a King Herod.

A ruler obsessed with himself, who fakes religious interest to gain the trust of certain people, whose wrath isn’t to be messed with and whose reign was historically polarizing. Are we talking about Rome circa 4 BC or America in 2017…?

Sometimes I find myself at the super yogi yoga classes at my studio. They talk about your third eye and grounding stones and the different chakras of the body. When they talk about the throat chakra, they focus on stretching various parts of your neck. Sometimes they have us do things that “will massage your thyroid”.

When this happens, I usually laugh to myself. Thyroid. Ha. I don’t have one of those! This week, I started crying. END_OF_DOCUMENT_TOKEN_TO_BE_REPLACED

I’m not the biggest new year’s resolutions person (I find they typically involve weight loss and equally get forgotten about), but I do love dreaming up when the new year can hold.

The latest craze, that I love, is choosing a word for the new year. One word. Focusing on it, digging deep into it, maybe reading a book or two on it or learning its origin. For the less nerdy, possibly just writing it on the front of their journal and calling it a day? One word. One. As much as I love this idea, I keep failing at it. I keep getting four.

Last year I tried so, so hard. I really did. I still got four. Maybe it’s my indecisiveness. Maybe it’s my love for words. I think it has more to do with a sneaky God who keeps reminding me it’s okay to live my life outside the lines I create for myself. Fine, Jesus, whatever – four it is. So this year, when they were spoken into my life, I didn’t even put up a fight. Yup. YUP. That’s it. That’s me. That’s 2017. END_OF_DOCUMENT_TOKEN_TO_BE_REPLACED

What immediately came to mind, when the instructor told us to choose our intention for the yoga class.

What I learned was so necessary, after spending a weekend in fresh, powdery, slippery snow.

What I’ve realized I’ve been lacking as of late. END_OF_DOCUMENT_TOKEN_TO_BE_REPLACED

Well, we weren’t sure it was a fire, the man pointed out, as there was smoke pouring out of his suite and fire fighters rushing in. There was just a lot of smoke.

It was a normal afternoon. I was stressed out, trying to prioritize too many tasks given to me at the same time, trying to figure out a way to make everyone happy. I really had to pee, but sometimes I ignore my bladder for the sake of getting work done. Healthy, I know.

I finally got up to walk to the bathroom down the hall, and smelled smoke. Not a lot, not a scary amount, but definitely smoke. I walked past a suite with the door open, smoke wafting out, and some people in the hallway. Awkward smiles, no explanations offered, I kept walking. Weird, I thought. Maybe someone blew something up in the microwave.

Until, a few minutes later, as I excited the bathroom, and I immediately smelled smoke. A lot, a scary amount, of definite smoke. I walked back and hesitantly asked, “Do we know what’s going on…?”

“Oh, there’s a fire,” a woman answered nonchalantly. Almost as if I simply asked what color her shoes were. END_OF_DOCUMENT_TOKEN_TO_BE_REPLACED 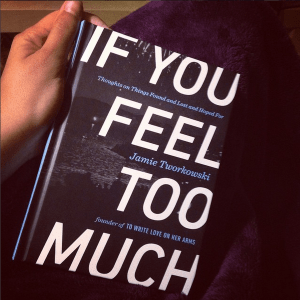 I finally, finalllllllly got my hands on Jamie Tworkowski’s If You Feel Too Much last week, and “excited” doesn’t even begin to describe it. As if a foreword by Donald Miller isn’t already the sign of a great book, he used my absolute favorite part of his latest Scary Close – “I think we were supposed to be ourselves and we were meant as a miracle”. Page xx and I already knew this book was going to be amazing. I may or may not have read the entire thing in 24 hours (as in absolutely I did). I think you should as well. Read it, that is. You can take longer if you so desire…

I still remember stumbling across To Write Love On Her Arm‘s MySpace page, back in middle school; I remember getting goosebumps as I read Jamie’s original piece, about Renee’s sentiment to remember the stars. It’s a movement you can’t help but join, an organization you can’t help but root for. It’s a message of hope, above all. A message we all need, a message I’m glad is being spread throughout the world every day because of brave souls like Jamie. END_OF_DOCUMENT_TOKEN_TO_BE_REPLACED