After my I’m-not-an-authority-on-dating dating blog, I figured it was time to write on something I do happen to be a self-proclaimed authority on: singleness

I was sitting on a panel on dating, four Christian singles lined up in chairs, when the classic question got asked. “What’s the hardest thing about being single?”

Two guys gave their respective responses, something along the lines of loneliness, self-confidence, watching your friends get married – the usual. Tentatively, I started, “I don’t want to belittle what they said. But I don’t think it’s hard.

“I mean, being single is hard… being in a relationship is hard… life is hard. I don’t think life is any easier when you have a cute boy to hold your hand; I don’t think life is any harder when you don’t have someone to text goodnight.” Even though I believed this with the core of my being – and I desperately wanted my high school students to hear this truth – I said most of this to my shoes. Because I knew this wasn’t a point of view I’m allowed to have, especially in the church.
I still remember sitting in Panera Bread, chatting about relationships, when my friend said it. So casually, so patronizing, so matter-of-factly …so there’s-simply-no-denying-this. “Krysti, no one likes being single.” 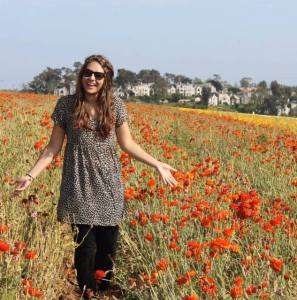 How do you find a picture that captures ‘singleness’? Let me know. I figured an awkward picture by yourself in a flower field comes close enough…

I laughed it off, made a joke about it, and we went on discussing wedding plans. But I was more hurt than I realized. And angry. Driving home, I kept thinking, “You don’t get to tell me how I feel. You don’t get to tell me what I can and can’t like.” Not angry at my friend, but at society. Because, here’s a shocker: I like being single.

When this sentiment is said out loud in groups of Christians, it’s usually assumed to be: A) highly sarcastic (as people bitterly bemoan their romantic lives & their curse of this “gift” from God) B) highly ironic (as people are obsessively on the lookout for their future spouse) or C) highly in denial (as people are stuffing ice cream in their mouths, crying, watching The Notebook, thinking they’ll never find someone, yet assuring their friends “I just looove being single!”). So there’s a problem when someone, like me, genuinely has no problem being single. The church doesn’t know what to do with people like me – because marriage is the ideal, so why am I not striving after it? I’m not against relationships; I don’t hate men. I just have no particular problem adventuring through life on my own until I meet a man who I think is worth inviting into that journey.

Because, NEWSFLASH, that’s what singleness is. It’s not that you’re a broken person; it’s not that something is wrong with you. It’s not that you messed up that last relationship and now have lost the love of your life. It’s the simple fact that, right now, you haven’t found someone to partner alongside you in life – for a various reasons. And you know what else? THAT’S OKAY.
Hear me, again: That. Is. Okay.

The danger of a single story, as explained so eloquently by Chimamanda Adichie, is something that typically weighs heavy on my heart for the developing world (that’s a whole other blog post!). But I think single stories do damage in many parts of life. And the church is telling a big one of singleness.

Loneliness. It’s what us singles are given tools to cope with, it’s what we are lectured on, it’s what we chat about. Personally, I’d love to see an article about “How To Handle Loneliness In Marriage” …but apparently it’s a feeling that is reserved for those of us without a significant other. I’m serious – singles need to see that it actually exists post-wedding-bliss, and couples should feel freedom to express their struggles. Are we really so dumb as to think only single people get lonely? A ring on your finger or a facebook official relationship is going to cure all your feelings of loneliness? Sure, maybe having someone to text 24/7 will distract you a bit from it. Maybe being able to tell someone every small detail about your day before bed will put a band-aid on the feeling. But we all get lonely, because we all strive for deep, meaningful connection – and that’s hard to come by. Even in relationships! There’s miscommunication and selfishness and bad days. The church needs to stop painting this picture of lonely singles…. Because, without meaning to, it paints the picture that marriage is the solution to loneliness.

More than “well I just have so much free time to serve Jesus!” and other, typical Christian-ese responses, I think there are real benefits to singleness. They are different to each person, just like each season of life is unique to each person. My college years were a lot different than yours; my first full time job as a graduate is unusual; my twenty-third year of life is unlike yours; my season of singleness isn’t going to be like everyone else’s. So I get why not everyone loves it – not everyone loved middle school.

What I don’t get is when people put their lives on hold or think they can’t be truly fulfilled until they have someone to hold their hand. The last thing I want is to sit around moping that I haven’t found my other half, believing that my life really has no worth until there’s a ring on my finger. Or, at the very least, until there’s a boy to post cute Instagrams of me, bragging about what a great person I am. Guess what? I know I’m a great person. I don’t need a cute boy’s Instagram to tell the world so.
I don’t want to be pining away, all by my lonesome, until a meet a boy who’s been equally as lonely. When our eyes meet, our hearts know, and once we fall madly in love we can finally start living lives of purpose – because *ta da* we’ve found our soul mate. I’m sorry if this is your fantasy, because it’s my nightmare. I hope I’m never attracted to a guy sitting on his ahem, donkey, waiting to meet a girl so his life can begin. I hope I’m too busy living life – discovering all of God’s adventures He has called me on – to even notice a boy like that.

Also, since we’re on the topic and all, can we STOP with the “I just don’t get why you’re single!!!” I get this a lot. I think it’s supposed to be a compliment and make me feel good. Instead, I typically want to respond with, “…and I don’t get why you’re in a relationship!” Because you’re inherently saying, “You’re great! …but single people aren’t great (duh…because they’re single). Sooo how are you single and great?!” To which I would love to, inherently, say: “if you’re that shallow/silly/stupid, and actually think a relationship is what gives someone value, I don’t really get why someone wants to date you…” (But I usually keep this thought in my head. Because, manners.) I understand that most people mean this as, “Wow, you’re so awesome, why hasn’t a boy realized that and proposed to you on the spot?” But let’s stop with thinking that I can only be awesome if a boy proposes to me. Okay? Okay.