As weddings have taken up so much of my life lately, I figured maybe they should take up a lot of my blog as well. Here’s a special wedding season series – some questions I get asked (or ones I don’t), some things I survived, some truths I’ve been learning. And, an extra bonus: one very special wedding!

At any group event where there’s lots of mingling with strangers, there’s this fun moment that typically happens to me. Weddings, especially. Sometimes I do a countdown, in my head, for the exact moment, because I can always see it coming.

At some prior point, word’s gotten out that I’m single, and I see the judgement in some people’s eyes, the surprise in others, the assumptions being made. I’m used to it. Whatever. But then, as conversation continues on, as we spend more time together, they start to speak – stop – hesitate, and I know it’s coming.

I laugh. I smile. I look at the floor. Because there’s just sooo many ways to answer, so many directions to go with this one.

Or I could mention how my friends have picked out the best of the best – and now their husbands have raised the bar impossibly high. (Like, impossibly high. No real guy is going to beat out my fake husbands, so why try?)

Or maybe explain how I missed that part growing up, when girls learn to laugh at boy’s dumb jokes / thoughts / comments, bat their eyes, and coyly smile. I typically just point out why the boy is dumb / the joke is bad / the comment is not factual. Oops.

I could use the ol’ “I’d rather stay single than lower my standards”, laugh, and change the subject?

It depends how sassy I’m feeling, really. (Most days: VERY). “But, really,” some persist. Some push back past the sass. “How are YOU single?” It should be a compliment. That’s how they mean it, I know. But it isn’t. Because when most first find out I’m single, they assume there’s a reason. They assume I have issues. They assume a whole host of things. But then, they find out this interesting, pretty, somewhat social and arguably normal girl is single and they can’t fathom why. How? What in the world?! It’s pretty annoying. Thanks for deeming me worthy of being in a relationship (by your standards), and now being curious as to how I can possibly not be in one.

But….. really. I hear you asking. Why are you single?? You’ve been writing about relationships, about dating, for like, ever. This is your second round of flying solo during wedding season. What’s going wrong?? What haven’t you learned yet? What’s your deal?????

Well. Let’s just be real honest, shall we? It’s not like this is the public internet or anything…

Maybe it’s because I’m that weird girl who writes about relationships. It’s pretty strange to be known as “that single girl” or the “relationship expert” (extra strange, since they seem to be pretty opposite things…). It’s weird to have people you’ve never met have access to all your thoughts on a typically private subject. When you write a lot about dating and relationships and all that fun stuff in a very public place, it makes actually dating and having a relationship a bit awkward… I’m not pretending I’m some sort of celebrity over here, but I’ve been on far too many dates where a guy assumed something about my life from my blog or cited something I’ve written. My name is very google-able. Awkwarddddd.

Maybe dating isn’t my favorite thing in the world. Meeting new people? Barf. Opening up to a stranger? Eek. Figuring out someone’s games, second guessing every text, figuring out what someone reallllllly means? Ugh. I have very little patience for it. Do you like me? Tell me. Do you want to take me on a second date? Ask me. Is this dragging on f o r e v e r? Count me no longer interested. I’m pretty straight forward, but most of dating – sadly – isn’t. I often joke with my friends I’m just going to resort to an arranged marriage (they get to pick him!), because dating doesn’t seem to be my cup of tea. 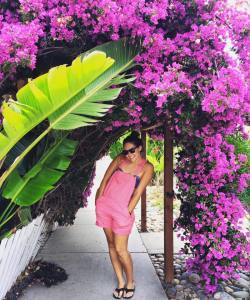 Maybe it’s because of my love of my pink overalls…?

Maybe it’s a timing thing. Can we all just take a collective “ughhhhhh” at how big of a role timing plays in relationships? (Seriously, even if you’re married – timing! Ugh. The worst.) Because, goodness, it’s annoying. I’m a firm believer that the right guy at the wrong time… is still the wrong guy. (I’m also a firm believer that some people use timing as an excuse to avoid commitment… but I digress) Timing is a huge deal for me, and has been a huge factor in why a lot of things haven’t worked out with otherwise great guys. Ahh, I’m moving to Malawi. Ahh, I’m in Malawi. Ahh, you live in a different city than me. Ahh, my life is just too crazy right now. Ahh, your life is just too crazy right now. Seriously, all. the. reasons. Timing is important to me – I’ve tried to force too many relationships, and ended up hurt and/or hurting someone in the process. It’s not worth it to me anymore. I’ve learned to respect timing – even though I hate it at times. #frenemies

Maybe I have bad taste in men. You start to wonder, after a while…

Maybe I find studying modern dating more fascinating than participating in modern dating. Don’t even get me started on Aziz Ansari’s Modern Romance or NPR’s study of the new Hinge or statistics about online dating or…. okay, I’m weird.

Maybe I have pretty high standards. Not that my friends in relationships don’t, not that I deserve better than others. But I have a prettttttty good idea of what I want. I have a pretty good idea of who I want to end up with (like a general who, not a specific who – that’s creepy). Most important, I have a pretty good idea of what I can’t stand. And, if I’m being honest, not a lot of guys measure up. There’s a smaller pool of who I’m even willing to consider, which means it’s gonna take me longer to find one – if I find one.
(Note: this is typically the part where people are thinking gosh, maybe if you lower your standards a bit and give mere mortals a shot, YOU WOULDN’T BE SINGLE. Hello! Maybe if you weren’t so picky, you wouldn’t be alone!!!!! Well….)

Maybe I enjoy being single a little too much. I don’t know how else to tell people this shocking news, but: I actually like being single. I like my alone time, I like deciding what I’m going to do with my space and who I’m going to spend it with, I like being on my own. Am I anti-relationships? Do I hate men? Is my life plan to be forever alone? Goodness, no. I’m just nowhere near desperate to be in a relationship, because I’m nowhere near desperate for my life to change. Actually, I’m dreading it a lil’ bit. So a guy has to be real amazing for me to even contemplate making some changes, and that has yet to happen. (See above)

So, it could be a lot of different things. It could be a mixture of a lot of things. Or it could simply be that my knight on a white horse in shining armor hasn’t fallen out of the sky onto my porch in a tux with a single red rose quite yet. Sigh. Don’t worry, in God’s perfect timing He’ll make it happen 6 months before Christmas (holiday engagement, duh).

If I’m being 100% candid… I’m not too worried about it. My friends often joke that so many guys want to date me because I actually have so little interest in dating. (Ladies, not sure if this is actually a viable plan. No promises. Don’t quote me on a reverse psychology dating strategy …but if it works, definitely quote me). I’m always open to a guy showing up in my life. I’m open to dating, I’m open to the possibility of a relationship. I’ve been pretty open to (constantly) being set up by friends. But I’m not out there actively seeking a mate, because I don’t feel the need to at the moment. Maybe I’ll regret this, when I’m 35 and still single. Maybe I’m doing something wrong, if I’m not relationship obsessed like most girls my age. But right now I’m living a full and fulfilled life without a boyfriend. Right now I’m completely whole and completely sane without a partner. Right now my life feels pretty wonderful, with just me in it.

But, Mr. Soul Mate, if you happen to be reading this…