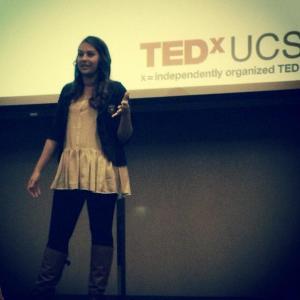 Two years ago, I gave a TEDx talk.

Somedays, I brush it off. It was only a TEDx talk, heavy on the x, light on the importance. Hundreds (thousands?) of people have given TEDx talks. I was only a student speaker. I was only chosen to mix up the topics (science-y UCSD needed a little warmth thrown in). I was only speaking on story – a simple topic, anyone could do that.
Somedays, the reputation of it is daunting. A TEDx talk? At 22? As a female? It is pretty impressive – so I try at all costs to avoid bringing it up around strangers, I inwardly shudder when someone new mentions it. Great, now I have to seem remarkable. Now I have to life up this idea they have of me. The pressure to perform in a manner of TEDx-speaker-worthy makes me want to go hide under a rock. Or, what I actually do, hide behind a laugh, a sarcastic joke, and a change of the conversation.
What I’m working on is landing in the middle: Being blown away by God’s ability to shine through our weaknesses, to use our passions to take us to places we never dreamed, to surprise us in the most amazing of ways. I still don’t fully understand why I was given such an opportunity. But I hope to use it like I use all the other privileges I’ve been given: to make this world a better place. Denying the prestige of my TEDx talk doesn’t help, neither does hiding from it. I need to be more open to ways God wants to use that, even two years later. END_OF_DOCUMENT_TOKEN_TO_BE_REPLACED