I spend a lot of my life waiting for the other shoe to drop.

I’ve realized this, lately. That whenever something good comes around, I’m just waiting for the bad to come with it. When there’s an exciting new beginning, I can almost see the bittersweet ending around the corner. I’m a firm believer in “if it seems too good to be true, it probably is” – except that, to me, any form of good seems too good. Any kind of happiness seems like it can’t possibly last. Any unexpected sweetness can’t be trusted.

Maybe it’s the result of getting sick as a teenager. Maybe it’s my reaction to certain life events. Maybe it’s part of being an Enneagram 5. Maybe it’s simply how I’m wired. In all honesty, it’s a probably a combination of all of the above and then some. I’m slow to trust people, but I’m even slower to trust life.

Every year, at some point, I find myself rereading Scary Close by Donald Miller. It’s free therapy and the best relationship advice (romantic & platonic!) and also some inspiring stories wrapped in one. As someone who has long struggled with vulnerability, it’s the kick in the butt I constantly need.

I think on a bigger scale, I tend to think life is out to get me. I live a very, very privileged life and I fully realize that compared to most on this planet, my life is a cake walk. (I don’t believe in Oppression Olympics, but if it were real, I’d probably come in second to last.) But I live in this strange fear that life, somehow, someway, is out to get me.

There’s this natural rhythm to life of inhaling and exhaling. Beginnings and endings. Old and new. Sunrise and sunset. Again and again and again.

And for me, in my life, it meant exciting new beginnings became bittersweet endings. Inhales quickly became exhales. Again and again and again. And I was used to it. Ready for it, even. Every time the new beginning came around, a part of me held back. A part of me was preparing for the ending that was bound to happen.

It doesn’t really make sense, does it? If you inhale preparing to exhale – are you really inhaling? Are you really nourishing your body, or are you going through motions?

I’ve been learning how to hold joy and pain in the same hand. Excitement and grief. Hope and disillusionment. I think to survive in this broken world, you have to be able to experience both. At least I do.

But the problem with learning how to hold both is I started to expect both, always. If I was feeling joy, I would hold a part of me back – waiting for the pain. If something was exciting, I just knew there would be something to grieve soon. I learned how to feel both, sure. But I didn’t use it to become a healthier person, a softer soul – I used it as armor.

I recently read Leeana Tankersley’s Begin Again and she talks about sunrises and sunsets in a hauntingly beautiful way. Dawn and twilight are both invitations to begin again; two gifts a day to sit back, reset, renew.

I’ve only ever lived in places with stunningly gorgeous sunsets (Southern California and Malawi could enter a serious sunset competition, and I think they just might tie for first) – and I must admit I take them for granted. Since reading her book, whenever I’m lucky enough to witness one, I take a moment to take it in. The beauty, the moment, the gift. The small invitation to begin again, in some small way, right here and right now. In the chapter Twilight Comes Twice (that name alone! serious heart eyes), she writes:

“Whether we are in crisis or chaos or calm, hope or disappointment, burial or resurrection, ordinary or extraordinary, we can  – because of the inexhaustible grace of God – begin again.”

In committing to living with open hands, I just got used to things being taken out of mine. Things were put in, for a season. But then they were quickly taken out. And although my fingers would start to curl out of muscle memory – they wanted to cling on for dear life, like before – I kept them open. Open hands, open hands, open hands. I just thought I was meant for a life of empty hands, a life of sunsets, a life of endings.

I went though a serious season of letting go a few years ago. Strip by strip, I felt Jesus asking me to take off all the identities I had clung to for so long. Being the non-profit girl. Being the youth group leader. Being overcommitted, over-involved, solving everyone’s problems. Step by step I finally got to me, just me. And I got so used to taking it all off – I got used to being okay with giving things up. It was a season of sunsets, one after another, and I adapted to sunset living.

Sunsets are a daily invitation to begin again – but I was using them as a reason to keep my distance.

I recently missed my flight to our family vacation. I woke up at the crack of dawn, after wrapping up finals the night before, only to get to the airport to a ridiculously long check-in line. After heading back home for a nap and some rerouting magic (thanks, Alaska Airlines!), I was on my way to Hawaii only 10 hours behind schedule. On my new flight, I flew over the Pacific at sunset. The orange glow stretched as far as the eye could see, seemingly never-ending water meeting seemingly never-ending sky in a burst of creamsicle gold. I thought about trying to snap a picture, but something in me knew better. My phone wouldn’t be able to capture it, sure, but also this moment was meant to be lived, not recorded. 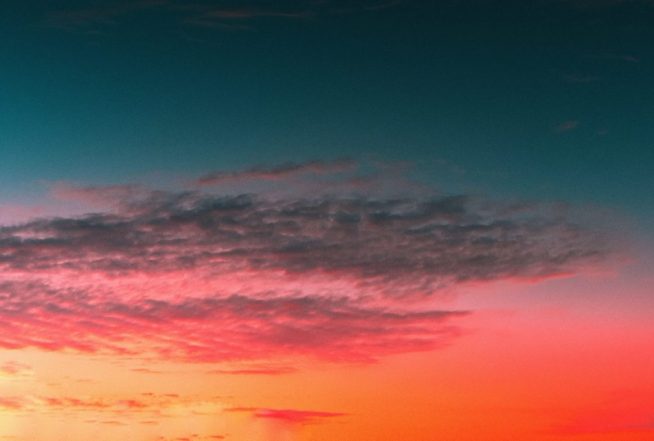 I thought about the stress of that week – some school related, some not. I thought about missing my flight and how it could have turned into a nightmare, but didn’t. I thought maybe, just maybe, everything was leading up to this moment: me, in the sky, at sunset. Maybe, just maybe, God was whispering an invitation in billboard size font; a small nudge with a sign the size of Everest. I like to think sometimes He makes himself painfully obvious, but still never forces our hand – still gives us freedom to make the choice on our own.

As I was slowly realizing this tendency in myself, to expect the exhale, to mentally prepare myself for the endings, I was where I always seem to find myself: in yoga class. In yoga, we practice breath to movement. Inhale in this pose, exhale out that pose. You follow your breath, you go at the pace of your breathing. Inhale: pose. Exhale: pose. Again and again and again.

I was trying to figure out what, exactly, to do with this newfound knowledge about myself. The nudge was there, the awareness – but, so far, no solution. Then the instructor did something that almost made me weep.

Sometimes I’m so busy running through life, waiting for the pain, preparing for the ending, that I forget some things aren’t meant to end. At least not right now, not right here, not in this season. In this season? I’m staying for the exhale. I’m sitting in a pose I thought would have ended two breath cycles ago. I’m seeing the sunset not as an ending, but as a lovenote in the midst of a beautiful story.