2016 seems like not too long ago and yet at the same time like another lifetime ago – but here we are in another election year. On the eve of Super Tuesday, I leave you with some non-partisan reminders. As I’ve said before – these aren’t pro a certain party or pro a certain candidate. They are simply pro common sense as we face the upcoming election.

I know, I know. There’s so much information out there, and so little time. I get it. I, too, scroll through CNN or Twitter or Facebook and just glance at the taglines thinking whaaaaaat?! But before I register anything as fact, before I go on spouting this new truth to someone else – I read the article. Headlines are great at grabbing your attention, but they are lousy at housing facts. Hyperbolic, dramatic, reaching, or sometimes downright false – they will do what they can to get you to click. So click! Read! Preferably with your brain turned on. But do not glance at a headline and think you learned someone new about a candidate, a poll, or really, anything. Read the article, or you keep your mouth shut.

(This should go without saying, but DON’T SHARE ARTICLES WITHOUT READING THEM. Sharing an article based solely on the headline is bad for the environment.)

Say It with Me: There is NO Such Thing as Unbiased Media

So while you are reading the article (ahem), make sure to take a look at who wrote it. A journalist? A scientist? Politician? Is it an opinion piece by a school teacher or an ex-marine? Or a paid piece by a staff writer? What platform is the article on, what news station held the interview? Make sure you know who is speaking, because all voices have a bias. Seriously. Every single one. Stop bemoaning prejudice media, stop blaming certain news stations for being biased. Every. Person. In the world. Is biased. I am biased. You are biased. The key isn’t finding an unbiased news source, the key is being aware of the bias of the news source.

*To note, I’m not saying all sources are biased, and therefore all are equal. There’s biased and then there are lies; there’s a difference from being a human being who has biases because we all do and a human being who is purposefully spouting non-truths. Which leads me to…

We live in the glorious (or horrible?) age of the internet, which means stories can go viral in seconds – whether they are true or not. So if you read something insane, Google it. If you hear a fact that seems a little off, investigate. Even if you hear something you want to believe – like the candidate you hate did the worst thing ever!!!! and on the eve of an election?! cRaZy!! – make sure it actually happened. In a world of fake news (truly), it’s on you to verify something before you believe it.

We Actually Agree on More than We Think

Don’t let the taglines fool you. Do Democrats and Republicans disagree on things? Of course. But sometimes we are led to think it’s so much more drastic than it is. The majority of America believes assault rifles shouldn’t be easily accessed by mentally ill citizens. Yet we’re told Democrats want to take away all our guns and Republicans are anti gun reform. The majority of America wants to be able to afford to go to the doctor, yet Democrats think socialism is the only answer and Republicans are okay with people dying, if it saves taxes. Um?? America, you’re dramatic.
I’m not saying there aren’t differences. There are. But look past the taglines and the catchy phrases and see what issues you truly care about and where you actually stand. Immigration reform means a lot of things. Higher taxes could actually save you money if it means no more health bills. Pro choice can involve caring for at-risk lives. Next time you talk to someone who disagrees with you, ask about the heart behind their vote – it might not be as different from yours as you think.

Please, please, please don’t look at the mess of the presidential election (it’s already a mess and we’re only in the primaries) and decide it’s not worth the energy. For starters, only 55% of America voted in 2016 – which means if more people had spent the energy we could have easily had a different president. But more so – local elections matter. Take a look at what else is going on this year, research what else you have a say in. The President is important, to be sure. But so are senators. State senators. Mayors. School boards. If you live in a state that allows propositions, your fellow voters have an idea they want you to consider.
The President makes more headlines, but the local government paves your roads. 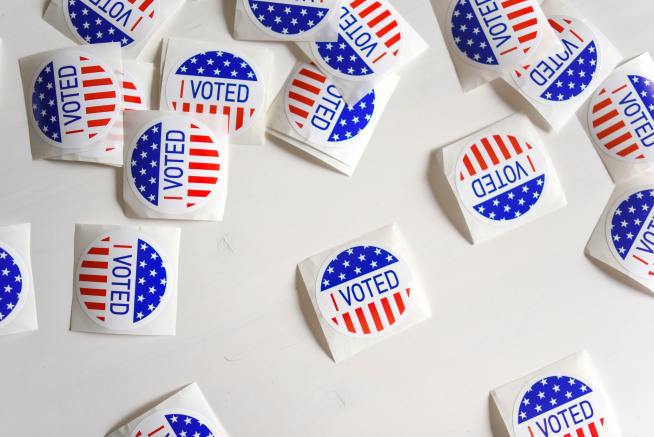