New years used to come with New Year’s Resolutions, anyone remember that? Yet I’m finding less and less people are into resolutions these days – it’s all about goals and dreams and the like. The really, really hip thing this year is having “a word” for 2016. I’m not quite sure if this is Reddit popular or simply just a Christian millennial thing – but its definitely a thing. I’m not knocking it or anything, because I jumped on the band wagon.

I asked God for “a word” for the next 365 days ….and I got 4. Blame it on my chronic overachieving, the fact that I’m a writer by nature, or God’s sense of humor – the fact is, I asked for one and I got quadruple the amount. Trust me, I tried. “God. I need a word. Like, one. Not four. Not two. But one, single word for 2016 – to focus on and write on my mirror and maybe turn into a cool tattoo one day. One word!” No, He reminded me gently, what you need is Me. Also, you need to listen.
[He has this conversation a lot with me.]

More living. Because shame robs you of so much life. 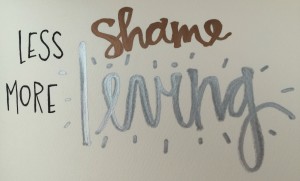 Shame has been a recurring theme in my life lately. After my book club struggled through Brene Brown’s I Thought It Was Just Me (but it isn’t) – so, so good but so, so dense! – I felt like a new person. Brown’s research revealed so much that I had accepted as normal, so much that I had buried down deep, was actually affecting my relationships and my life. Her shame resilience (as she calls it) is powerful stuff – as is knowing your shame triggers, shame web, and the power of empathy. I recently started a Theodyssey course at my church, and have been delving deeper into truths that I hold near and dear to my heart. Some truths, it turns out, are lies – false claims that I believe without hesitation and hurtful words that I tell myself daily. It’s a scary realization. But it’s also freeing.

In that strange way learning sometimes get forced upon you as you read about something in a book, and then hear it on stage at church, and then a completely unrelated friend brings it up and the next day you happen to stumble upon an article about it… (Does that ever happen to anyone else?? Just me? Cool.) I’ve been learning that although we know we are created in God’s image, we tend to create Him in our own image. We take our personality traits and our flaws and our imperfections, and we project them onto a holy, perfect being who has no flaws to speak of. We mistakenly believe He is only capable of the conditional, broken love that we know; we box Him into our little, limited understanding. We can’t fathom how truly great our God is, instead we create and worship and serve a god that we can fathom.

I far too often think that God is just and jealous and a judge. He is these things – but first and foremost He is love. I tend to think of Him as the God who creates the wind and the rain and the waves pounding down, instead of remembering that He is also the Jesus who calms the storm. If I’m Elijah, I mistakenly think I see God in the earthquake, the wind, and the fire. I totally miss Him in the silence.

It’s been a season of growth and maturity for me. Aka it’s been a season of pain, hurt, attempts at healing, unanswered questions, learning to grieve, and questioning my worth. And, if we’re being honest, a lot of shame. I like to think that if I can understand my pain – if I can find the logic why my life feels off and see the reasoning why my anxiety is through the roof and understand the cause behind my soul cringing – that it will make it less painful. Spoiler alert: it doesn’t work.

Then, out of no where (aka the Holy Spirit has my back), I realized something extraordinary. Those words may be true, but they weren’t coming from my Father. It was shame talking. And you know what? Shame is a liar. Shame is a bully. Shame is not your friend.

After I told shame to shove it, I realized the beautiful truth that shame was trying to cover. God wasn’t upset with me or critiquing me or belittling me for my mistakes and my pain, He was far too busy caring for me. He was hurt that I was hurt, and heart broken that I was broken hearted. He was mourning that His child has to live in broken world full of broken humans, He was weeping on my behalf. I mistakenly had placed Him on a heavenly throne – distant, unreachable, indifferent. Instead, He was beside me, wrapping me in His embrace, breathing hope into my weary wounds.

There’s a lot of lies I’m still unlearning. There’s a lot of characteristics that I still mistakenly project on God, on others, on myself. There’s a lot more mistakes I’m going to make. And that’s okay. Transformation is an on-going process. You can take three steps forward and two steps back and then a few sideways and end up somewhere you never imagined. If God led you there, don’t sweat it. Focus on Him – not on the destination, not on the person you think you have to become, not on the shame that is trying to steal your happiness.

Shame is isolating. Shame is fear invoking. Shame is gut punching and soul wrenching and life draining. And this year, I’m working on having less of it. Less hanging my head, less apologizing for who I am, less holding people at an arm’s length away. Instead, I’m choosing more life. More deep breaths and deep soul work and deep belly laughs. More vulnerable conversations and vulnerable soul searching and vulnerable risks. More proclaiming truth, more sharing truth, more living in the Truth.