I had just asked one of my girls if they wanted to go to the optional 8am worship gathering the next morning. Knowing them, and knowing high schoolers, even if they were dying to be there there’s no way they would go alone. So I was asking the cabin who wanted to go in the morning, if I should plan on getting them up in time and attending along with them. Instead of answering my question, they all turned it back on me. “Well, if you’re going…” “…I guess we will join you, Krysti….” “…if you want to go, that is…”
It was after midnight. I had just finished my first week at my new job, gone to a high school basketball game (by myself) to watch some of my girls cheer, gobbled down McDonalds, and then drove a rental car of teenage girls up the mountain in the dark. And they were asking if I wanted to be awake at 8am the next morning. The answer was pretty obvious. But what I told them was, to me, even more obvious: “It’s not what I want. I’m here for you.”
My students never get that. Or they never fully believe it. Part of it comes with being an indecisive high school girl. I’ve been there. Part of it comes with not being able to fully grasp unconditional love… I’ve been there, too. We all have. It’s part of being human, part of Christianity that we all have a problem accepting. 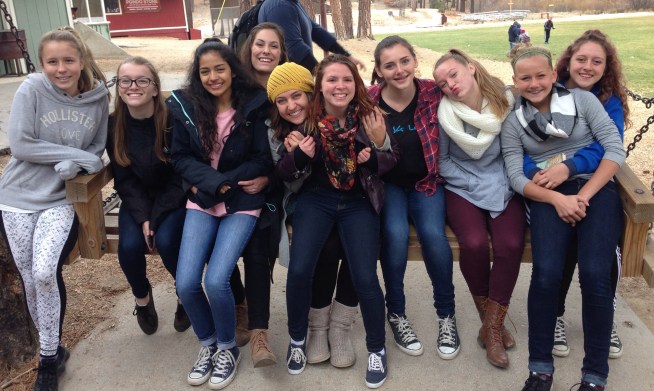 The girls who made Winter Camp 2015 worth every sweet, sleepless second!

One of the reasons I’ve fallen in love with youth ministry (besides the really fun sleeping hours), is how much I’ve learned about the nature of God through how much I love my girls. (Which I DON’T do perfectly, and come NO WHERE close to how God truly loves us. But… I try) In that moment, late on Friday night, I was finding it comical that my girls didn’t understand I was clearly at camp for them. I didn’t show up at Pondo in freezing cold weather to eat camp food and not shower for a whole weekend for me. I didn’t decide that a relaxing, joyous weekend for me involved a few hundred high schoolers. I didn’t miss celebrating my friend’s promotion or postpone coffee with a friend I still haven’t seen since moving back because I was dying to be out of town for the weekend. I knew my students were going to have an amazing, faith making, life changing weekend and I wanted to be a part of it – because I’ve chosen to be a part of their lives. So I wasn’t at camp to decide what sounded fun for me; I was at camp to join them in whatever sounded fun for them (except that 2 hour nap I took during free time that wasn’t so much “fun” as it was necessary…).
Trying to explain to this concept to my girls proved impossible, so I finally told them all I really, really wanted to go to worship early the next morning, and they could join me if they wished. As I (finally) went to sleep that night, I realized I do the same thing with God. Sometimes He asks me what I want, where I want to go in life, or what I need from Him. Instead of being open and honest about my needs and wants, I try to shrug Him off – “whatever You want, God”, “I’ll go where You lead”, or “why don’t You decide, and I’ll just join You”. Now, I can picture Him shaking His head, laughing a little bit. “Krysti, I’m here for you.”
“I didn’t just happen to be working here, and you showed up to coincidentally fit into My plan. I didn’t happen to paint this masterpiece of a life, and you fell into it by chance. And I definitely, definitely didn’t happen to be up on that cross. I did it for you, I died for you, I am here for you.”

This should be such a basic lesson of faith. And yet I learned it at twenty-three years of age, at a camp for high school students where I was supposed to be a leader. Isn’t that the beauty of our faith? None of us have arrived. We all have things to learn from each other. I constantly discover truths from the students who I am supposedly teaching; teenagers who aren’t even sure about this whole faith thing help me realize concepts that have always seemed above my head. I love that God allows that to happen, that He doesn’t make faith a hierarchy of power or knowledge. I love that He chooses to reveal Himself to us in so many ways, if we only look for Him. I love that He jealous for me, that He chose me, and that He is here for me.