Home. A word without meaning right now. That’s what I wrote in my journal on my final flight home. After an extra week in Malawi, a whirlwind week in Uganda, and far too many hours of travel, I was a mere sixty minutes away from finally landing in San Diego. Yet along with my excitement came some uneasiness.
I had been counting down the seconds to see my friends. I had, embarrassingly, been dreaming of Mexican food. I had been eagerly anticipating returning to “normal” life. But I realized I had just left a place that truly became home to me – to return to a place that I wasn’t completely sure could ever feel like home again…
That’s the thing people don’t tell you about becoming a missionary (gosh, I hate that word) – you no longer have a home. Your heart belongs in so many different places. No matter where you are in the world, you’re missing another part of it. 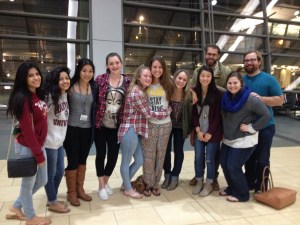 I had the best welcoming party meet me at the airport – hugs I had been waiting 6 months for, signs with my name on it, and a burrito(!!) were all waiting for me. My first Sunday at DFCC was filled with so many kind words from people who have watched me grow up. And my first Thursday back at Flood Youth was fantastic. All these events involved people exclaiming, “Welcome home!” 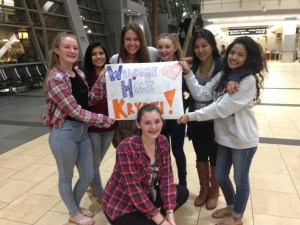 And it made me wonder – is this home? America feels so foreign at times. It’s so loud. It’s so fast paced. It’s so much – every inch of spare space filled, every second of every day planned. How can I ever fit in here? How could this have ever felt normal before?
Yet Malawi, as much as I loved it, also felt unknown at times. So much chaos that seemed to make sense to everyone else. So many times my white skin reminded me that I wasn’t from there. So many cultural norms that were so far over my head. So many times I just wanted to be back in America, where life made sense. Or where it used to…

This middle ground is hard. This no man’s land has started to feel like my true home, which I don’t enjoy. As my worlds collide, lines are blurring, and I’m not sure where I fit in anymore – if anywhere. My wooden Malawian curios are now intermingled with my shoe collection, all the tichenje I brought back is now tangled up in my American wardrobe – all strewn on the floor of my new bedroom as I’m trying to unpack into a new home. Into a new normal.

C.S. Lewis talks about this feeling of not belonging. He points out that the longing all humans feel for something more, for some other place, is proof that we were made by a higher being, that we – ultimately – belong somewhere else. To quote a cheesy country song, this is our temporary home. We weren’t created merely for one life on earth. We shouldn’t feel settled here or fully satisfied, we should be feeling out of place in this broken world. Because it’s not where we belong.
It wasn’t until my first Sunday back at Flood that I really, truly felt at home again. Maybe it was because I had been back in America for a week and a half, maybe it was because I walked in with my best friend by my side, maybe it was because of a million other variables. But I think it’s because that’s where I’ve encountered God. That’s where He has met me. That’s where I’ve been surrounded by community, where I’ve stepped out into the unknown, where I’ve experienced his grace time and time again. The closest thing we have to home, to our true home, is that.

As Christians, we are called to live in that middle ground. In this world, but not of it. Residents of earth, citizens of Heaven. We need to be present where we are and we need to be content in the place where He has currently placed us; yet we also need to be mindful that we belong somewhere else. That our aim is to one day hear those beautiful words – “Well done, My good and faithful servant. Welcome home.”