I’m a feminist. That word probably brought about eye rolls, head shakes, or the highly hilarious “Want to hear a joke?? Women’s rights!” line. You’re probably expecting me to now rant about how all men are from the devil or support the #FreeTheNipple campaign or complain about rape culture. (For the record, I totally believe in rape culture.) You’re probably expecting a lot out of  me, because the word ‘feminism’ comes a with lot of assumptions.

It’s frustrating, really, because feminism is so simple. It’s like dating – a very basic thing that we’ve decided to make so incredibly complex. Do you like someone? Ask them on a date. Do you not like them? Tell them. Communicate. It’s not so hard. And yet we go out with people we don’t like and break up with people we do; we text and “talk” and hang out and hook up with people, but we don’t go to dinner with them. We take this very simple concept – date someone you enjoy spending time with – and make it confusing and heartbreaking and a battle. Similarly, we take the simple belief of the equality of the sexes, and we turn it into a war.

That’s all feminism is: equality. If we want to get technical, it’s the advocacy of women’s rights on the grounds of political, social, and economic equality to men. It’s not “don’t you dare open the door for me, you horrible man species”. It’s not “all men have to suffer now because women have suffered in the past”. It’s not Vagina Monologues or Slut Walks or whatever else people have come up with lately. (Yes, there are some feminists who support those things. But there are some Christians who believe in killing homosexuals…)

I get there are some crazies out there, I get there are some radicals. What I don’t get is that lately people have been feeling bad for all the Muslims who have been unfairly caught up in the hate towards ISIS, and yet can’t see the same has been happening to feminists for years. (Yes, I know, NOT THE SAME THING. Gender issues and terrorism, they’re very different. Just trying to make a point here.) I want to be able to say I’m a feminist without getting laughed at. I want to be able to support this movement without a snide remark about what other people – who also support this movement – happen to do. I want people to see that there are lots and lots and lots of different views on feminism – instead of writing it off immediately, maybe be open to a conversation about it instead?

I’m so tired of being asked if I’m going to vote for Hilary “just because she’s a woman”. I think it’s ridiculous that it’s 2015 and the American people are finally getting around to considering a woman in the Oval Office; however, I don’t think anyone should be given any position just because they are a woman. That’s not equality at all.

I’m used to being the only girl in the room. It’s not my favorite and it can be uncomfortable at times, but it’s becoming more normal for me. I’m invited into meetings of all men, asked for opinions amongst men, and have shared the stage with only men. I would hate to think I was only invited there because of my gender – instead I hope I earned those spots because my knowledge is desired and my ideas have merit and I work hard at what I do. My sex has nothing to do with that. (I guess it could be argued that my opinions or presence was requested for a “female option”, for diversity’s sake.) I want to live in a world with more women CEOs and more women best selling authors and more women pastors – just like I want to see more minority representation. Yes, I would LOVE to see a Mrs. President. But I don’t think putting people in places they might not be qualified to be, giving them things they haven’t earned, is going to get us anywhere. 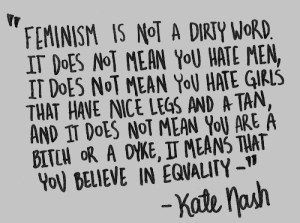 I know it comes with a lot of bad connotations and I know it’s been used to back up some pretty weird things. But feminism isn’t the dirty word we keep making it out to be. It’s not a group of scary woman who refuse to shave (although, some do), and it’s not a joke. It’s another word for equality. Let’s believe that. Let’s use it. Let’s change the world, together.