It hailed last night. In San Diego. This is for all you people who claim “Isn’t it sunny and 75 everyday??” Clearly NOT, as we had 10 minutes of hail one night this year…

It was actually pouring on and off all day long, which I enjoyed, as I was already inside. (The insane winds in the morning, as I was running errands in a summer maxi dress, I did not enjoy. Dressember struggles). At some points it was coming down so hard, it reminded me of rainy nights in Malawi. You haven’t heard rain until you’ve heard a Malawian downpour on a tin roof. So. Incredibly. Loud.

As the sprinkling turned to pouring, and the pouring turned to hail, and my house got incredibly closer to freezing, I remembered praying for rain this time last year. In Malawi, in the middle of the insane heat, the rains were the latest they had been in years. Farmers were worried about crops, the country was worried about its future. (I was worried about melting to death.) The President even made a public announcement asking everyone to pray – in their own religion – for rain. That’s pretty crazy. That’s pretty desperate. 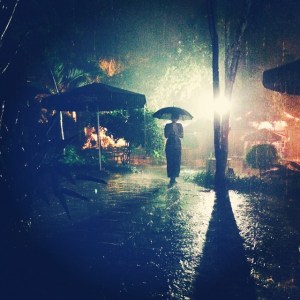 And then the rains came. I can’t fully describe it, except to say sometimes I wondered if our house had magically moved under a waterfall. One night, driving, we could barely see 10 feet in front of us, the road had turned into a mini lake, and it was one of the few times I have legitimately been scared for my life. The worst part was, southern Malawi flooded. Thousands lost their homes, their land was ruined, and close to a hundred people lost their lives. It was heartbreaking – especially when you thought “I prayed for these rains…”

A friend of mine shared with me what he claimed was an African proverb – I’m not completely sure where its origins are from: “When you pray for rain, you pray for mud.” Which is so true. In the dry, dusty heat, all we wanted was rain. And when it finally rained, the dust was finally gone! …only to be turned into mud. And yet it was what we wanted, it was what we hoped for. It was just different than we had in mind.

When you’re praying for rain – in the middle of a heatwave – you don’t consider everything that comes along with it. The mud, the cold, the never-ending wetness. You only think of the glorious, glorious rain – ignoring all the potential drawbacks.

I’ve been reminded lately that most good things we ask for, that we hope for, come at a price. They come with mud. And that doesn’t make them bad, but it means we have to know what we’re asking for. In our current drought, I think we’re all okay dealing with some mud for the sake of rain (or, in San Diego’s case, lots of puddles, bad traffic, and cold weather). But it’s when we ask God for a romantic relationship, and we’re upset when it involves hard work. When we ask for community, and it comes along with a need of vulnerability. When we ask for health, and it comes along with a diet. We want the rain, we want the good times, we want the joy, but we don’t want the mud.

What rain having you been praying for? What mud do you need to start welcoming in, as well?

One thought on “Dressember 12: When You Pray For Rain…”