I can’t help but wonder… why are we talking about bathrooms again? Why, exactly, do we care where people pee??

I can’t help but wonder if these are the same excuses once used for segregated bathrooms. If this is the same process we had to go through to remember that black people are, in fact, humans, too. If these are age old lessons that we will have to continue re-teaching people. If we realize we’re going to be on the wrong side of history.

I can’t help but wonder why we suddenly care about women’s safety. Why we suddenly care about rape. Why we are ignoring both the zero attacks, ever, by a trans woman in a women’s bathroom and the 1 in 5 college women who will be sexually assaulted while a student. Why we’re ignoring the fact that 8 of 10 women know their rapists and are choosing to pretend that rape by complete strangers in public places is so rampant. Why we aren’t concerned with a broken justice system where 2% of rapists spend time behind bars, but are so very concerned with a legal system concerning bathrooms.

I can’t help but wonder why we feel no desire to get to the heart of the issue (teach. men. not. to. rape.), but instead are concerning ourselves with silly details that allow us to feel like we’re contributing to the problem. Why we don’t care about rape culture – we like to deny its existence, actually – yet love to claim the rape card when it makes our side look good. Why we are claiming the safety of the majority to excuse away impugning on the safety of the few.

I can’t help but wonder why a people who is supposed to be known by their love, who is commanded to live by the gospel of grace, who has been instructed to live lives like that of a leader who consistently placed Himself on the side of the marginalized insists on constantly marginalizing the hurting and the lost. If you’re so demanding as to tell people where to pee, how comfortable do you think they’ll feel walking into your church? Have you already picked out their seats, there, as well?

I can’t help but wonder if we, even for a second, tried to put ourselves in the shoes of these people we are talking so much about. I see mentions of the women who will be attacked or of the children who will be molested or of the men who will wear dresses to sneak into bathrooms – but are we talking about the people who are trying to simply use a bathroom? Are we imagining how terrifying it must be to have ugly connotations of yourself in the news, of being constantly misunderstood by people at large, of simply wanting to use the toilet – and not knowing what will happen when you do? Have we even considered the very real violence they face every single day?

I can’t help but wonder what would happen if we truly knew the types of people we peed next to. How many sexual offenders, pedophiles, or abusive spouses use our bathrooms? How many liars, cheaters, or internet trolls are in the stall next door? Are we ignoring some planks, being self appointed bathroom morality police, while focusing on some specks?

I can’t help but wonder if maybe I’m missing something – because it simply doesn’t make sense to me. Am I misreading the facts, am I missing some key component, am I viewing this all through some skewed lens I refuse to acknowledge? Are the people I’m vilifying in my mind actually correct about something here, and I am very wrong? I want to be open to that idea. I think we all need to be open to that idea.

I can’t help but wonder what people who don’t even have bathrooms are thinking of us, arguing over who gets to go where and when and why. When you’re used to a hole in the ground or a cement block to sit on or a community outhouse – public plumbing seems like a hard thing to comprehend. The idea of so much concern over who uses it must also be.

I can’t help but wonder if people know we aren’t, actually, talking about bathrooms. We’re using the word bathroom, and yet meaning something different altogether. We’re debating people’s worth. We’re debating if these types of people have rights. We’re debating how far their sphere of safety should extend. We’re debating things that should never be up for debate. 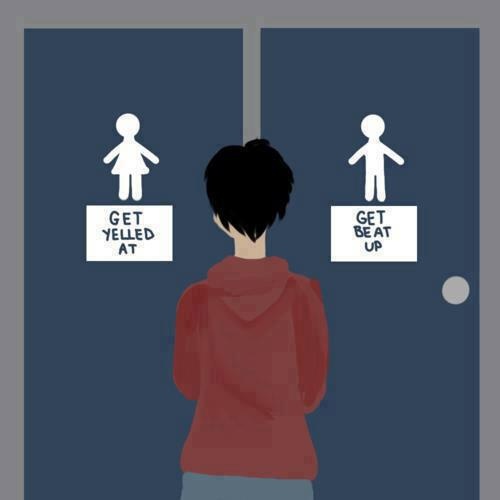 This isn’t a battlefield. This is a bathroom.

These aren’t monsters. These are people.

This isn’t about a political statement. This is about peeing – preferably in peace.