A year ago, I never thought I’d be back here. Going on three days of not sleeping, trying to figure out my hair’s newest texture – figuring out a new normal as my body and thyroid battle it out once again. A war I thought was over. Now a seemingly never ending battle.

My dad got para-thyroid surgery a few weeks ago. Soon we’ll have matching scars on our neck; our health problems slightly different while our age of diagnosis makes all the difference. This holiday season I realized you can be mad about the disease or thankful for the medicine. Mad about the genetic lottery you seemingly lost or thankful for winning some kind of birthright lottery that landed you in a country with modern technology. Mad over what feels unfairly taken or thankful over what feels unfairly given.

The first anniversary of a friend’s death fell on Thanksgiving this year. Right smack dab on Thanksgiving, of all holidays. A year ago I never thought about every holiday coming with a side of heartache, I never considered all the people silently mourning while so many are celebrating. I wondered if every Thanksgiving from here on out will remind me of him. I wondered if, as life goes on, you add a little more pain every year. I wondered if that’s part of growing up.

And yet, a year ago, I never thought I’d be here: working at a job I actually like, with people I like seeing everyday; one of those wanna-be-yogis complete with a ridiculously expensive monthly memberships to a yoga studio; a person who values boundaries and self care and taking care of your body as much as taking care of your soul. I didn’t hate my life a year ago, by any means. I just never imagined, a year ago, I could love my life this much.

A year ago, I had no idea the amount of friends who would move away. Some, geographically; some, into different life seasons and stages. Change typically hurts. Not always outright, not always in the same fashion as a heartache or a loss – but it’s new terrain with old people, it’s different and it’s uneasy and it’s hard. There’s something so special about getting to watch your friends in new circumstances thrive, something that I would never give up to go back to our old closeness. But it’s different. Different doesn’t mean bad, but different takes some getting used to.

A year ago, I had no idea that I would find my people, so many people, in so many new places. In small groups and group texts, at dinner tables and happy hour, around the fire pit and around busy schedules. Uneasy small talk and tentative laughter gave way to rich, life giving friendships that I am so thankful for. So grateful for.

A year ago, I had no idea I could feel so complete by people so different than me. Friends of various ages, life stages, genders, ethnicities and belief systems challenge me and encourage me and educate me. Being open to different has been a game changer for me.

A year ago, I would have assumed a “what do I want from the next year of my life?!????” blog would be mandatory on my birthday. A year ago I would be upset that isn’t what is currently falling out of my fingertips. A year ago I would be frustrated and annoyed at this reflective crap that doesn’t seem to have a rhyme or a reason and definitely isn’t going to have a catchy ending. A year ago, I was still trying to decide who I was; instead of simply allowing myself to find out.

A year ago, the person I currently am didn’t feel possible. She wasn’t even on my radar. And I love that. I want every year to feel like that – to come upon a new year of life, and have gone through so much the prior year that I didn’t even think my current self was possible. Maybe we’re all works in progress, and we have to allow ourselves to go through the pain and sit in the unknown and trust the growth process to realize we’re something we never even considered. Maybe we’re all mini-miracles, just waiting to be discovered.

Maybe birthdays are just an extra special day, one where we get to sit back and look at the trajectory life has taken us on. See all the growth from years past; hope for the new growth that will come with this upcoming year. Growth isn’t easy or painless or always fun – it typically involves a lot of change and a lot of different – but I have faith that it’s worth it. I don’t always see Jesus’ long game, but I do, when I make a point of looking, see Jesus’ fingerprints. 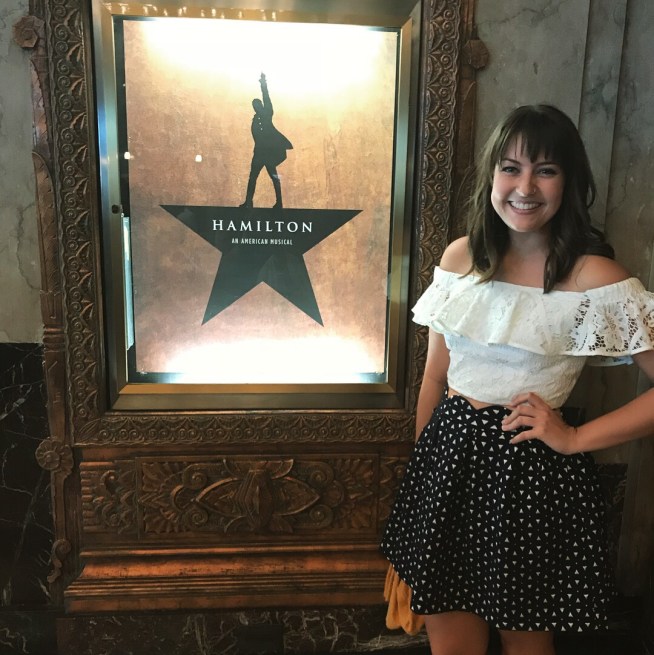 Also, for my birthday, I SAW HAMILTON. Okay. That’s all.