There’s this little historical event happening in DC this weekend – have you heard?? It’s the Women’s March on Washington. If you know me at all, you know I’m STOKED – thousands coming together to rally for equality? Taking a stand for justice? The sass involved of planning it for the day after a man who, seemingly, has no respect for women takes the highest office in the land? SIGN. ME. UP. (I’ll be attending the sister march in San Diego!)

Because of the march, there’s been a lot of discussion on feminism lately. Can feminists be pro-life? Do feminists HAVE to be pro-choice? Is it a women only movement? How intersectional are we being? Is feminism even needed in 2017??

Being a feminist is not always easy. Being an out spoken, passionate about justice, hey-I-write-blogs-about-feminism-a-lot feminist is really not easy. I get a lot of flak from friends. I also get to be a part of a lot of really cool conversations with friends, which I am thankful for. I recently read an article warning to beware of male feminists, which I thought was a little intense and yet incredibly thought provoking. Since then, I’ve been taking a lot of mental notes during the conversations I have with men about feminism. I’ve come to find that, generally speaking, there seems to be seven kinds of men…

The “Feminism is Such a Joke” Men
They might believe the gender pay “isn’t really a thing”. Or scoff that all feminists are simply “man haters”. Or make really, really hilarious jokes where feminists are always the punch line (typically re-used dumb blonde jokes, because originality is what they are known for). They refuse to acknowledge any areas of inequality, except in fun places like, “Well men have to pay for dates! What’s up with that?!” or “I’m at work all day while my wife sits at home – I’d love to trade!”
They’re also the ones you hear saying, when pushed to have a real conversation, “C’mon, women have had equal rights since, like, the twenties!” and “I’m married; I can’t be sexist”.

The “I Believe in Equal Rights, I’m Just Not a Feminist” Men
Many women fall into this category, sadly, as well. This point could be a whole blog post in itself (it probably will be one day), but for the sake of time let’s revisit the definition of feminism: Google says “the advocacy of women’s rights on the basis of the equality of the sexes”, Merriam-Webster says “the theory of the political, economic, and social equality of the sexes”. If you believe in equal rights, by definition, you ARE a feminist.
Does that mean you agree with every movement that has the stamp of “feminism”? No. Does that mean the word doesn’t make you uncomfortable at times? No. People will associate you with all kinds of fun connotations of feminism – I get it. That’s not fun. That doesn’t make you any less of a feminist, though. 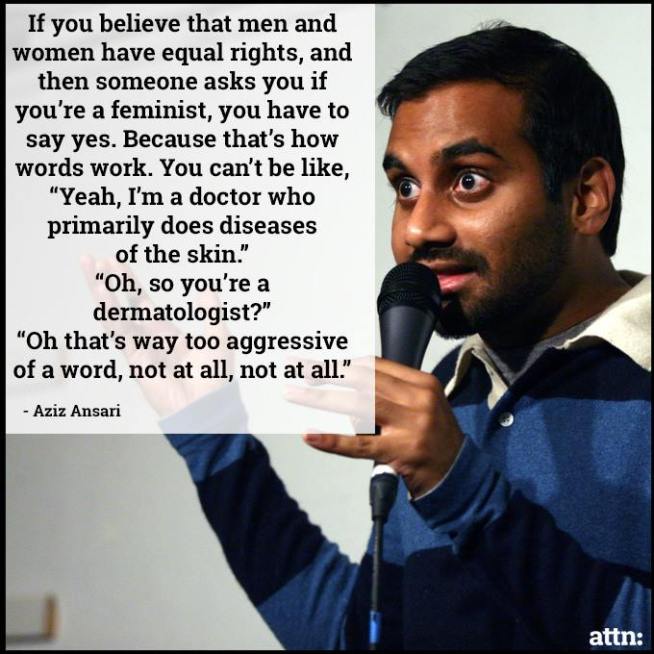 If you don’t believe me, take it from Aziz. No one argues with Aziz.

The Men who Make Feminism All About Them
This typically happens in two ways. On one extreme, they focus on how feminism has hurt men – they feel unfairly blamed, unfairly judged, and unfairly hated by feminists. There are many problems with this. One being not all feminists are like that, so you can’t claim the “man hater” thing. Two being WE’RE FOCUSING SOLELY ON MEN AGAIN. Yes, feminism is about equality. Gender norms hurt men, too – I know. But would we talk about racism and focus on how much it’s hurt white people? I don’t think so.
On the other extreme, they embrace the idea of rejecting gender norms ….but only for themselves. Men can be sensitive! Men can cook! Men look good in pink! I’m a feminist! Equal treatment! Ohhh but you want to preach? Eep. Better leave that to the men. You want to be in charge? Ah, girls just aren’t good at that. You want to drive?! Ha. Women with directions. Amirite?

The “Oh I Totalllllllly Believe in Feminism; Let Me Mansplain to You what Feminism Actually Is” Men
I will fully admit I don’t know everything. I will fully admit I make mistakes. I will fully admit there are some men out there who can teach me so much about feminism. But more common are the men who, with their feminist badge proudly showing, like to inform me what feminism actually is. “No, that’s not the definition.” “That actually doesn’t matter.” “That aspect isn’t as important as this.” Please, please, sir. Tell me more. Would you like me to make you a sandwich while you inform me of everything I don’t know?
To be clear, women don’t have absolute authority on feminism – defining it, fighting for it, explaining it. That’s not what I’m saying. AND YET, women have been the historically repressed gender, so maybe I know a thing or two about feminism? Maybe you could listen to my take on things? Maybe – just maybe – you could ask abut my experiences rather then explaining to me my own reality.
When you, as a man, are completely dismissing my words, ideas, and knowledge because you assume your male self knows better – it’s beyond frustrating. And when it’s about feminism, it’s beyond comical. (Hint: this time you’re the punchline)

The “I’m TOTALLY a Feminist. But Actually I’m Going to Second Guess Everything You Do and Say” Men
Very similar to the above men, yet slightly different. These are those sneaky guy friends who you think are on your side – they believe in equality, they push back against gender norms, they proudly claim the f word. And yet… they make jokes about your beliefs. They get easily offended when you counter them (but do they counter you? All. The. Time.) They talk over you often and without thinking. These might simply be qualities of a bad friend, I know. But here’s the thing: they don’t do any of this to their guy friends.
We notice. Okay? We notice when a guy says a smart alike retort and there’s a chuckle, when a girl says a similar sassy remark and there’s uproar. We notice when our idea goes unheard, yet 5 seconds later the same idea out of a man’s mouth gets agreed with. We notice when our words are met with eye rolls, smirks, 5 questions, and dismissal; we notice when men get taken at their word without a second thought.

The “I’m Totally a Feminist! But I’m Gonna Sit Over Here Enjoying my Male Privilege” Men
These are the men who are oh so very close to being our closest allies. SO CLOSE. We talk feminism with them. We complain about the patriarchy and they hear us. We moan and groan about our unfair lives and they agree. They rally alongside us when we denounce outright, undeniable sexism. But when something subtle happens? When theres a little whiff of the patriarchy, where are these men?? They’re humming to themselves in the corner, hoping to not have to deal with it.
Sexism is uncomfortable. Uncomfortable for many, many reasons (hello, high heels) but also incredibly uncomfortable to confront. It’s pretty awkward to have to tell someone, “I think you aren’t treating her right because of her gender” or “You’re letting stereotypes affect your judgement” or even “Hey, that was kind of out of line”. But until we get comfortable confronting these issues, THINGS WON’T CHANGE. Even more, we really, really need men to start confronting them. Just like white people have a special platform to speak out about racism, men have a special platform to speak out about sexism. You don’t get to claim feminism and sit silently enjoying your deluxe suite in the patriarchy.

The Very, Very Rare “I Know Less Than You, I Believe in You, and I am For You” Men
ALL. THE. PRAISE. HANDS. These men are few and far between, but they exist. And, I’m choosing to believe, they are growing in number. These are the men who ask questions, before offering any answers. These are the men who not only champion women’s rights, but also champion women leaders, women decision makers, and women taking their seats at the table. Did you read that? Some men fight for a bigger table; some men willingly offer up their own seats at said table. Because they know it’s right to do so.
They don’t buy into the “that’s the way things are” or “boys will be boys” nonsense, and they don’t try to force unsustainable change brought about solely because of their male privilege. They desire lasting change brought about by well respected, well educated, well known women. They are the helpmates, the maids who do the dirty work in the background, and the stay-at-homers who do hours of unpaid, un-acknowledged labor in the fight for equality. We need them. We need more of them. 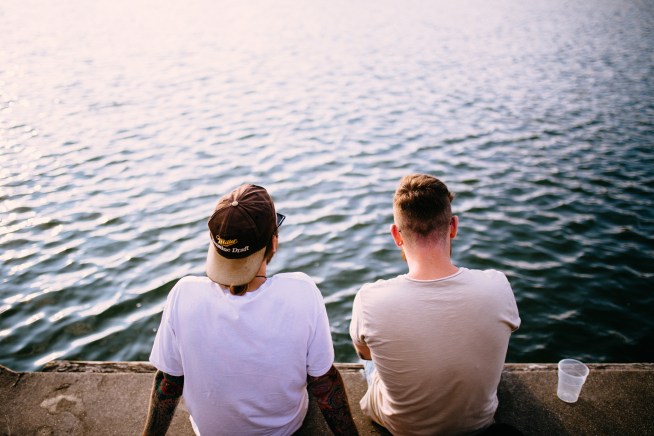